The Serrapilheira/ICTP-SAIFR Training Program in Quantitative Biology and Ecology will train young Brazilian and other Latin American scientists for world-class research on biology and ecology using the quantitative methods of mathematics, physics, and computer science. It strategically makes use of the country’s well-established excellence in mathematics and physics to tap into Brazil’s tremendous potential in life sciences.

Brazil’s ecosystems are among the richest in the world, and it is becoming increasingly clear that their inherent complexity poses enormous scientific challenges to find solutions that allow them to survive and flourish. The goal is to build an interconnected network of highly skilled scientists who can make significant contributions to advance the field in Brazil and Latin America.

To reach its goal, the training program will be highly selective and involve students at the beginning of their graduate studies who have already developed quantitative skills and are interested in applying these skills in solving cutting-edge problems in biology and ecology. Lectures in all areas of biology and ecology will be presented by international experts, and no previous knowledge of biology is required.

Because of the COVID-19 pandemic, the first edition of the program will take place in a shorter online version during the period of July 5-31, 2021. There were online keynote presentations via Youtube on March 2 by Prof. Simon Levin (Princeton U.) (click here to watch) and on March 4 by Prof. Akiko Iwasaki (Yale U.) (click here to watch) to announce the program. Future editions of the training program will take place at ICTP-SAIFR/IFT-UNESP in São Paulo with the second edition planned for the 6 month period of July – December, 2022.

Students with quantitative skills who will have finished their undergraduate studies by the end of 2021 at a Latin-American institution can apply to participate in the four-week online training program by reading the application instructions and submitting the online application form before May 3, 2021 at 17:00 BRT.. Approximately 50 students will be accepted into the program, and priority will be given to the first 500 applications received. Confirmed lecturers in the July program are listed on this webpage, and any questions should be sent to qbioprogram@ictp-saifr.org

In addition to attending lectures by internationally renowned researchers, students in the program will work in small
groups on a research project supervised by a postdoctoral mentor. Applications are open until April 8, 2021 for postdoctoral mentors who will be responsible for proposing and supervising a one-month research project.  Mentors should have a PhD in an area related to quantitative biology and can apply using the online form on this webpage. The mentor’s responsibilities will include participation in the first stages of the student selection process, acting as chair in some lectures, and supervising and mentoring the research project for a small working group of 4-5 students. Accepted mentors will receive a single 4000 BRL stipend and are invited to participate in all online lectures during the program.

Antonio Coutinho is an immunologist with an extensive career and a comprehensive view of science and scientific thinking. In addition to leading groups and institutions in Sweden, Switzerland, and France, from 1998 to 2012 he directed the Instituto Gulbenkian de Ciência, in Portugal, considered one of the best research training centers in the world.

Hanna Kokko works on evolutionary ecology of sexual and asexual reproduction, analysis and management of animal populations, evolution of reproductive and social strategies, and sustainability science.

6. Priyamvada Rajasethupathy (The Rockefeller U.) – Neurobiology

Priya Rajasethupathy’s team bridges systems genetics and systems neuroscience to provide unique cross-disciplinary insights into memory. She aims to reveal the molecular, structural, and functional changes governing the evolution of a memory, and ultimately further understand cognitive processes during health and disease.

Daniel Mucida studies how the immune system associated with intestinal mucosae maintains a careful balance by generating efficient protective responses without jeopardizing its tolerance to innocuous foreign substances. He will be teaching together with his research team members Angelina M. Bilate and Bernardo Reis.

William Bialek works on the dynamics of individual biological molecules, the decisions made by single cells in a developing embryo, and the system that the brain uses in representing information.

By combining mathematical models, experiments in controlled conditions and environmental data analysis, Silvia De Monte and her team explore the interplay of cellular-level properties and collective function on the ecological and evolutionary time scales.

Her work focuses on the dynamics and distribution of biomes, especially within and at the intersection of savanna and forest. Her team uses a combination of empirical and modeling approaches to understand how local interactions of trees with their resource and disturbance environment scale up to predict landscape- and continental-scale patterns in tree cover and the distributions of biomes.

Corina Tarnita’s research examines the organization and emergent properties of complex adaptive systems at multiple scales, from single cells to entire ecosystems. Simultaneously, her team uses empirical data to identify and catalog patterns in nature and, within the general frameworks, they develop models whose predictions they attempt to empirically test using eco-evolutionary experiments, molecular and genomic analyses, and field manipulations.

Jordi Bascompte combines mathematical models, simulations, and data set analyses to address fundamental and applied questions in ecology. His current major research interest focuses on the structure and dynamics of ecological networks. Jordi is also a member of the Advisory Committee for the Training Program in Quantitative Biology and Ecology.

Iain Couzin focuses on revealing the principles that underlie collective animal behavior. By developing an integrated experimental and theoretical program, his research aims to understand how, and why, social behavior has evolved in a large variety of systems, from swarming locust, to schooling fish, to flocking birds.

Max Rietkerk’s team has discovered that spatial vegetation patterns in dry ecosystems follow certain mathematical laws, which can provide insight into how close the ecosystem is to a threshold value for sudden desertification. The team studies the mechanisms leading to these patterns, through which they understand how sudden desertification can be prevented and how areas already affected can be restored.

Malin Pinsky studies population and community dynamics in primarily coastal marine ecosystems with the goal of understanding the impacts of global change and the actions that could foster abundant wildlife and healthy ecosystems. His team uses statistical tools, field ecology, population genomics, and mathematical modeling to understand general patterns that extend across larger spatial scales, deeper in time, and across a wider range of species than would be possible with more traditional techniques.

Click here for Application Instructions for Postdoctoral Mentors in English.

Click here for Application Instructions for Postdoctoral Mentors in Portuguese.

Click here for Frequently Asked Questions in English and Portuguese.
Please send any other questions to qbioprogram@ictp-saifr.org 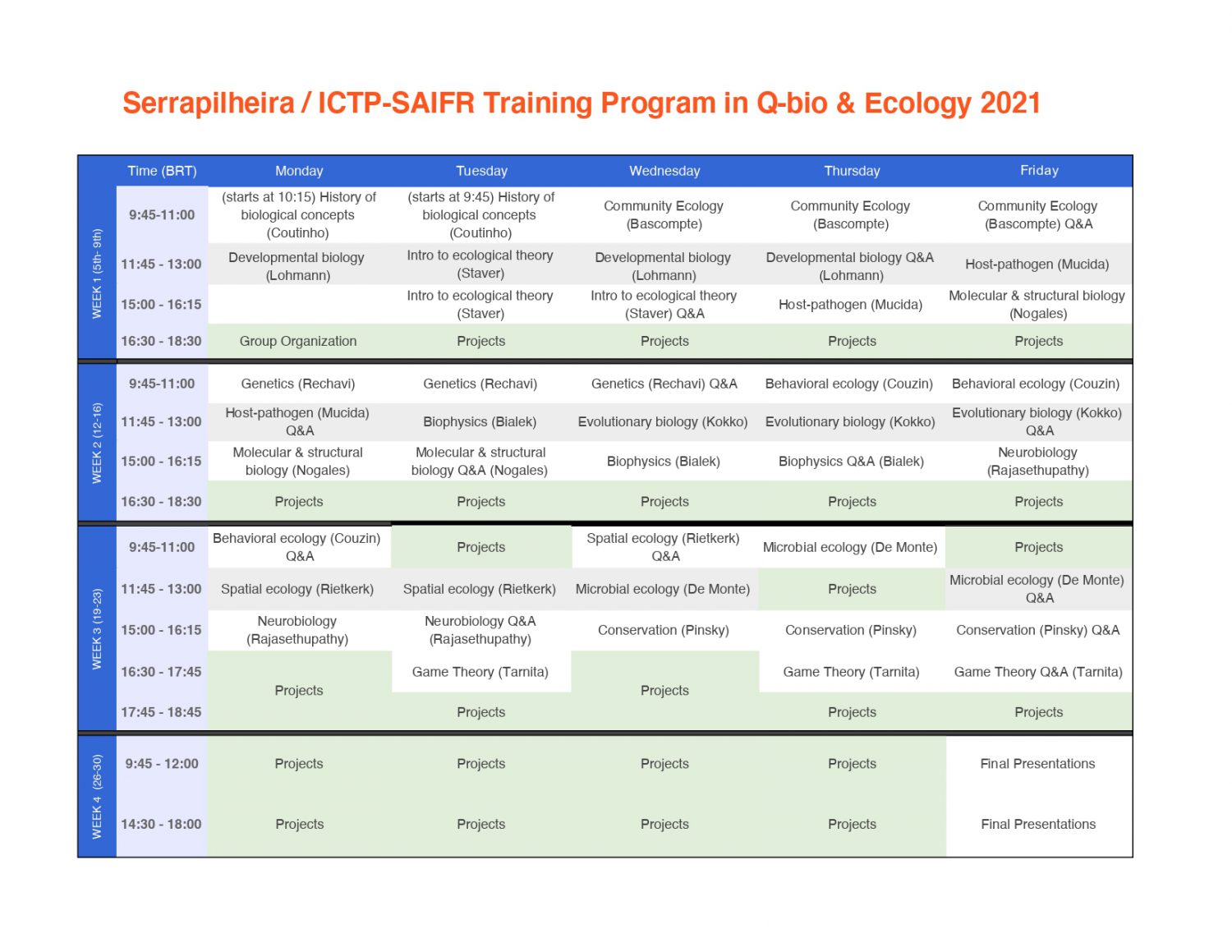